The Temple of Forbidden Knowledge of the Shadow Warrior is a building inside of the NinjaNomicon which houses Norrisville Ninja abilities such as the Art of Healing, Art of Telepathy, Art of Flying, etc. There seems to be something sinister about the Forbidden Knowledge of the Shadow Warrior, considering the bad effects that generally result from Randy's use of the magical devices kept in its temple. Still, this knowledge does prove helpful to Randy in Randy Cunningham - Punchademic. 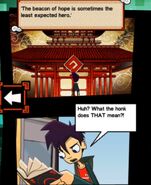 Add a photo to this gallery
Retrieved from "https://randycunningham9thgradeninja.fandom.com/wiki/Temple_of_Forbidden_Knowledge_of_the_Shadow_Warrior?oldid=77084"
Community content is available under CC-BY-SA unless otherwise noted.