Start a Wiki
"So U Think U Can Stank" is the third episode of the first season of Randy Cunningham: 9th Grade Ninja. It premiered on September 18, 2012.

Randy and Howard are sick of being nameless freshman faces at Norrisville High, so they decide to sign up to be judges for the talent show contest hosted by Heidi Weinerman to replace Bash Johnson and Mick who decided to drop their promise to be judges and become contestants instead. Randy and Howard also decide that they should play the "Good Judge, Bad Judge" gimmick where Randy pretends to love every performance while Howard brutally criticizes each performance like Bash Johnson and the Bros. This plan backfires, however, after Howard gives harsh criticism to Juggo. The Sorcerer takes this oppurtunity to transform the distressed Juggo into a monster, which Randy has to destank. With Randy out being the ninja, Howard is left alone to berate Theresa Fowler and Accordion Dave, whose distress causes them to become stanked as well. Frustrated at all the stank, Randy goes into the NinjaNomicon and learns about the Sorcerer and his stank. Randy realizes that Howard's criticism caused all the contestants to be turned into monsters, and quickly goes to warn him about his actions after he finishes saving Theresa, Dave, and Juggo. 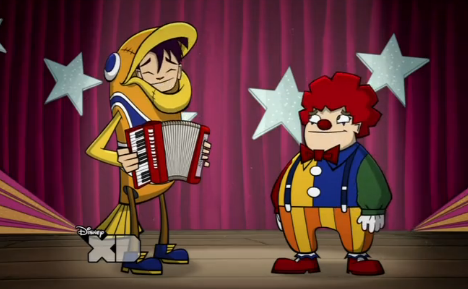 At first, Howard doesn't listen to Randy, but he soon sees what Randy is talking about when he accidentally causes Morgan's dance team, the Dancing Fish, to transform into monsters. Randy saves the dance team, but since there was only one act, Randy and Howard are forced into the talent show dressed as clowns playing accordions and twirling batons as punishment for "ruining" the talent show. Even the audience decides to disapprove of them, but Randy and Howard are satisfied when everyone now knows their names.

Retrieved from "https://randycunningham9thgradeninja.fandom.com/wiki/So_U_Think_U_Can_Stank?oldid=76202"
Community content is available under CC-BY-SA unless otherwise noted.