Sinjin Knightfire is a magician and the owner of the Magic Funporium.

He first appeared in "Julian's Birthday Surprise." He also made a cameo as one of the sponsors Stanked in "McNinja - Brought to You by McFist." 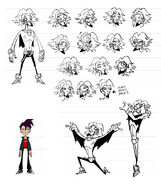 Add a photo to this gallery
Retrieved from "https://randycunningham9thgradeninja.fandom.com/wiki/Sinjin_Knightfire?oldid=82476"
Community content is available under CC-BY-SA unless otherwise noted.