S. Ward Smith is the metal shop teacher at Norrisville High and the swordsmith that crafts the Ninja's swords. His apprentice is Brent.

S. Ward Smith hunches over, and he has dark brown hair. He is blind, so he wears sunglasses, and he has a few golden teeth. He wears a gray tank top, an apron, teal pants, brown boots, and brown gloves. His lower right arm is bandaged.

Mr. Smith's pretty much portrayed as one of those elderly masters seen in classic martial arts films. Usually, he takes no nonsense whatsoever and never seems to crack under pressure. He feels like he's too old to be a metal shop teacher, but he still dedicates his life to crafting swords for future Norrisville Ninjas. 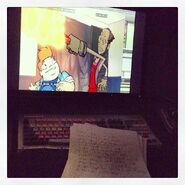 Add a photo to this gallery
Retrieved from "https://randycunningham9thgradeninja.fandom.com/wiki/S._Ward_Smith?oldid=77668"
Community content is available under CC-BY-SA unless otherwise noted.