Start a Wiki
Robo-Apes are Viceroy's robots that work for McFist at McFist Industries. They're often doing jobs at McFist's businesses like catering or hunting down the Ninja. The Robo-Apes are voiced by John DiMaggio.

Led by the head Robo-Ape, they follow McFist's orders, although many casualities happen whenever they fighting the Ninja. Viceroy, at one point, gave them different modes, like Strike Mode and Ape Mode--although he had to remove them after their uprising in "Rise of the Planet of the Robo-Apes". They aren't very intelligent, but they are strong and fight in numbers. They also sometimes have attachments, like swords and kitchen whisks, depending on their intended job. 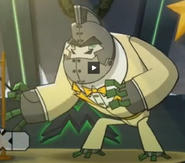 Robo-Ape: Uh-oh. Why are you wearing Larry?

Randy: Because once the Ninja is known he can never be unknown, and if you had known it was me, you never would have let me in.

Robo-Ape: (in a pose of confusion) Processing, Processing...

Randy: No NINJA SURPRISE RESCUE! (slices Robo-Ape in Half)

Robo-Ape: Still processing... (splits in half)

Retrieved from "https://randycunningham9thgradeninja.fandom.com/wiki/Robo-Apes?oldid=77671"
Community content is available under CC-BY-SA unless otherwise noted.