Pradeep is a lanky Indian boy with long hair and tan skin. He originally had eyelashes, implying that the character was meant to be a female at first. When not in a band uniform Pradeep wears a teal shirt, with a long sleeve yellow shirt underneath, with grey pants. His shoes match his shirt colors.

When stanked, Pradeep turns into a lime green beast with long brown hair like the human Pradeep, and a more slender physique, with large ape-like arms. His eyes are long, un-sturdy, and stem-like, similar to Julian's stanked form. 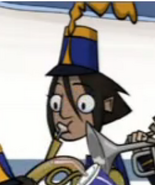 Add a photo to this gallery
Retrieved from "https://randycunningham9thgradeninja.fandom.com/wiki/Pradeep?oldid=81848"
Community content is available under CC-BY-SA unless otherwise noted.