Plop Plop is the First Ninja's squire and friend. He was the guardian of one of the Sorcerer's balls for 800 years (First Ninja wasn't "asking" when he offered Plop-Plop the post) until Randy allows him to leave his temple and he becomes a part of the Nomicon with the First Ninja.

Plop-plop was introduced in "Randy Cunningham: 13th Century Ninja." He was tasked with the duty of retrieving the Tengu Stone or the Eye of Eternities to First Ninja to seal The Sorcerer in the pit. However due to Randy's intervention the Sorcerer managed to steal it before Plop plop take it. He reported it to First Ninja after which The Sorcerer showed he had the stone in his possession.

When Howard suggested they should give up, to which plop plop readily agreed to. He was later seen walking with First Ninja disheartened but stopped along a hill when he and First Ninja saw that Randy and Howard were battling the Sorcerer. When First Ninja was reciting the lesson given by the NinjaNomicon, Plop plop thought he was talking to him to which First Ninja told him to "shut up." During the end of the fight after First Ninja joined the battle and threw the Sorcerer into the pit and plugged it with a boulder, Plop plop jumped on top the boulder to hold it down but stated that he couldn't hold it for long.

After the battle ended he commended Howard on his bravery and said he would name his daughters after him and later laughed after pronouncing his name.

He later appeared in "Aplopalypse Now" where it was revealed that he was made the guardian of a power ball that First Ninja had found. Plop plop wasn't completely sure at first but later agreed when First Ninja made it clear that he wasn't asking. Plop plop remained in The Enchanted Temple for 800 years guarding the ball from the Sorcerer. A seal was made to protect him for the balls evil. He was unable to leave the temple hence a new Ninja had to quest to replenish his supplies every four years.

When it was Randy's turn, he and Howard made their way to the temple which had been moved to the sewers. After their pleasant reunion, Randy realized that Plop plop was old enough to act as their guardian so they would be able to watch a horror movie. Randy asked if he leave temporarily to which Plop plop replied that Randy was The Ninja and it was up to him. Randy allowed him to leave and took the ball with them.

They spend their time at the movie theater and at PJ McFlubbusters, all the while the Sorcerer was trying to take control of Plop plop's body. While eating Plop plop revealed about the seal which was now broken. Panicking Randy tried to get them back to the temple but it was already too late as the Sorcerer had possessed him. Possessed Plop plop ran out of the restaurant and stole a car, Randy and Howard got inside the car as well. On the way to the school Randy tried to break the Sorcerer's hold on him by talking but was proved to be ineffective.

When they reached the school the Sorcerer had turned him into stanked monster resembling a sumo wrestler. Randy too transformed but was unwilling to harm Plop plop. During the battle Randy realized that the only way to free Plop plop was to put him into the Nomicon.

After the fight Plop plop now destanked hovered above the opened Nomicon when Randy apologized saying it was all his fault but Plop plop forgave him replying that he had the best day in a long time and that he could visit him anytime in the Nomicon. Randy opened the Nomicon showing that Plop plop was inside and was sitting with First Ninja being excited while First Ninja shook his head. 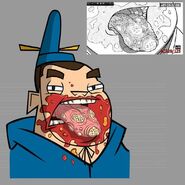 Retrieved from "https://randycunningham9thgradeninja.fandom.com/wiki/Plop_Plop?oldid=82603"
Community content is available under CC-BY-SA unless otherwise noted.