NomiRandy is an alternate personality created by the NinjaNomicon to teach Randy a lesson about balance in the episode "Shloomp! There It Is!" While NomiRandy is not actually evil, his laissez-faire and self-centered attitude causes chaos in Norrisville High.

He is similar to Randy in many ways, but there are a few important differences. He speaks with a Boston accent and he wears his hood all the time. He also lacks the morality and sense of duty that his counterpart possesses, which makes NomiRandy seem "edgy" compared to his counterpart. He is also very calm in most circumstances, keeping his head when Bash yells at him and easily outsmarting him. Even a stanked Theresa Fowler rampaging in front of him isn't enough to faze him. He also shows that he is attracted to Heidi, flirting with her and not reciprocating Theresa's interest in him.

His first and only appearance is in "Shloomp! There It Is!," in which he serves as the main antagonist.

In the beginning of the episode, Randy has just narrowly managed to defeat McFist's latest robot menace, at the cost of severe damage to the school grounds. He comes to the realization that his battle would have likely gone much better if only he had heeded the advice of the NinjaNomicon, and decides from that point on to go "Full Nomicon", consulting the book for advice at any given opportunity, including everyday issues such as whether to shower that day, or what to eat for lunch.

Unfortunately, the NinjaNomicon will only tell Randy that

Randy continues to misinterpret the meaning of the lesson, causing the book to grow increasingly frustrated with him. Finally, the book resorts to drastic measures and creates an alternative version of him (which Randy later dubs "NomiRandy"). NomiRandy attacks Randy within the NinjaNomicon and ties him to a chair. Randy can then only sit and watch helplessly as NomiRandy exits the book, and takes over his body.

Once outside, NomiRandy immediately presents himself as a version of Randy Cunningham who does not care for the advice of the book, OR the responsibilities of the Ninja, going so far as to ignore a Stanked Theresa Fowler in order to hang at the Game Hole, much to Howard's delight.

While at the Game Hole, Howard begins to realize there is something wrong when Randy ignores his high-five ("whiffing" a "slap"), at which point he deduces that the NinjaNomicon had something to do with this. Taking the book out back, he has a brief threatening exchange with the book in an attempt to find out what it has done to his friend, and finds himself shloomped into the book himself. Inside, Howard finds the real Randy tied to the chair and frees him (by landing on him on entry and breaking the aforesaid chair).

It is at this point Randy begins to realize the true meaning of the book's lesson-of-the-day, after realizing that NomiRandy is a version of himself who blatantly disregards all advice from the book, in contrast to himself, who has been consulting the book for everything. Deducing he must go "Half-Nomicon" to regain his "balance", he then exits the book, winding up in Howard's body and doing battle with NomiRandy.

The battle seems to go well for Randy, until NomiRandy puts on the Mask and dons the Ninja Suit. Even then, however, Randy is able to outthink his lesser half and force him into the NinjaNomicon with himself, whereupon Randy and Howard are returned to their own bodies, and NomiRandy supposedly ceases existing. However, there is the chance that he continues to exist within the Nomicon. 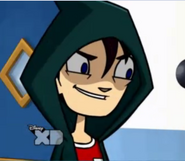 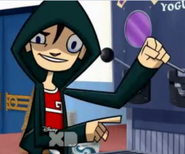 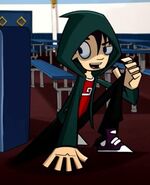 Add a photo to this gallery
Retrieved from "https://randycunningham9thgradeninja.fandom.com/wiki/NomiRandy?oldid=80400"
Community content is available under CC-BY-SA unless otherwise noted.