Evil Julian is the evil version of Julian created by Julian's contact with a power ball. He is one of the main antagonists of Season 2, along with The Sorcerer.

Evil Julian resembles Julian, but in place of the dark purple that regular Julian wear he wears white (as he himself points out), his lightning-shaped necklace becomes a skull-shaped necklace, and the skull in front of his hat gains a hat itself. Evil Julian has aquamarine eyes.

When Evil Julian transforms into a monster, the tails in his tailcoat act as legs with oversized arms. His face slightly resembles a skull and is less spidery, and there are three lines underneath each eye. When the Norrisville Ninja tries to stab Shadow Julian's hat, the hat does not break. The tails in his tailcoat can regenerate from an attack. From "Mastermind of Disastermind" onward, Randy calls him "Evil Cyborg Julian," as Evil Julian encases himself in machinery to give himself an advantage.

He was created in "Julian's Birthday Surprise." Evil Julian was trapped in the Land of Shadows, but in "Snow-Klahoma!" he switched places with Julian, leaving the normal Julian trapped in the Land of Shadows and Evil Julian free in Norrisville. In "Mastermind of Disastermind," Evil Julian gained possession of one of the balls. After "Winner Takes Ball," he had all of them, but he lost them after Randy and Sorcerer defeated him in "Ball's Well That Friends Well."

When Julian returns from the Land of Shadows, he and Evil Julian merge together, presumably causing Evil Julian to cease to exist.

Evil Julian is a power-hungry, chaotic person whose mannerisms are similar to Julian's. Unlike the quieter and generally friendlier Julian, Evil Julian is demanding, impatient, and violent.

Evil Julian absobing the Chaos Pearl power from the people who came in contact with the infected water.
Add a photo to this gallery 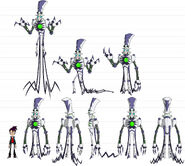 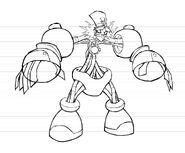 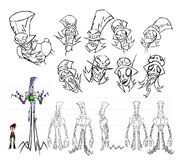 Add a photo to this gallery
Retrieved from "https://randycunningham9thgradeninja.fandom.com/wiki/Evil_Julian?oldid=81859"
Community content is available under CC-BY-SA unless otherwise noted.